Deepening knowledge of the company's employees is the key to let them develop themselves and keep them in good mental condition. There are a couple of ways to provide them with it. Of course, an interesting and challenging project should be a major factor, as most of the developers' time is consumed there. Giving them an opportunity to take part in side projects, for example, via hackathons is also a great way to explore new areas.

Another great idea to expand their horizons is just to let your employees share knowledge between themselves. Here comes a fairly easy way to make it work, which is Lightning Talks!

Such talks are also a great way not only to share experience between your employees but also it can be spread over the world via any social media, streaming platforms or meetups/conferences. The commercial value is also significant, as you can advertise yourself with such video talks to prove to your potential clients that 'know-how' of your developers is vast and they are eager to learn and explore.

It is worth to mention what actually Lightning Talks are and what they are not, as some people do not see any difference from other formats.

Lightning Talk (later referred to as LT) is a very short, intensive presentation, in a defined time frame between 5--15 minutes, presented to an audience, which might be a conference, meet up, some type of community or just any other group of people who are eager to listen. Here, we want to focus on LTs in your company and so the listeners would be your employees.

An important issue to remember is that LT is not a time-consuming way of presenting talks. As its name says, it should be a 'lightning' talk, so should be quick and concise. It has to arouse curiosity and interest of people to get deeper into the topic. For complicated topics which need explanations or just long presentations, it is preferred to prepare a different format - for example, workshops.

How to handle the topic

As I mentioned before, Lightning Talks are a great way to improve your developers, but to keep the process healthy, you have to find a method to manage it properly. There are a couple of issues that you have to think of before you introduce this idea:

So let's jump to the answers! 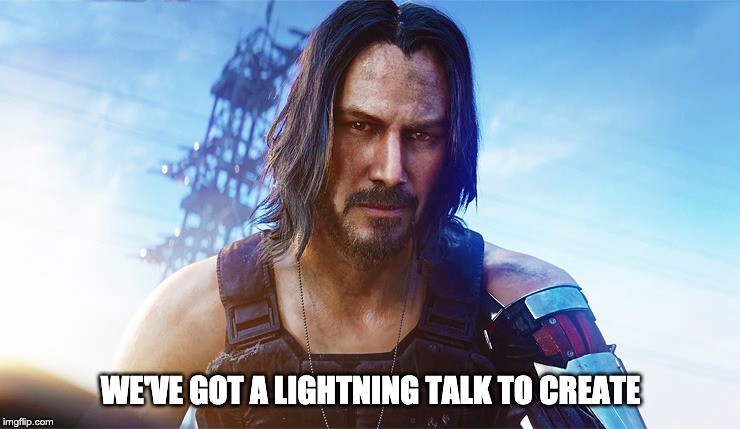 Are you able to implement LTs?

The first question is whether you are ready to implement such a process into your company. You have to be aware of the fact that you need someone who will handle the whole process of leading/advising/recording people and their presentations. You need to remember that preparing such talk might be time-consuming for specific people and probably you'd have to give him or her some time for that. If your business is not mature enough and your team is still quite small, it can seriously impact your workflow.

Who and how will manage the LTs process?

When you finally decided that you want to start a journey with Lightning Talks, it is a good time to assign the responsibility of organizing and managing this process.

At Visuality, such separate processes are managed with the help of groups called 'committees'. These committees consist usually of 2--4 people who control the defined process. So here, for the purpose of managing Lightning Talk process we've created Lightning Talk's committee. As a LTs committee, we handle multiple tasks which are relevant to those talks. We advise people how to prepare the speech; we also try to push them to prepare some if it is needed; we make rehearsals with them; we record and edit those talks for further usage. 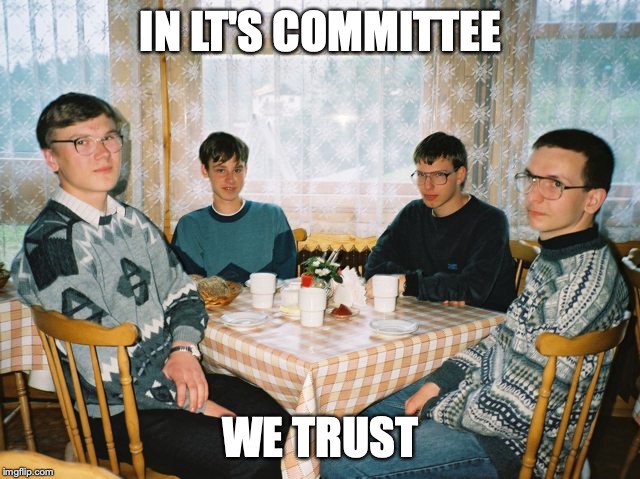 Committee obeys regular QAT process, as it is practiced in any other project, with the usage of Notion dashboard. There are regular meetings which serve for setting new goals or resolving the state of existing ones.

What is also important is that we set some general rules that people should follow in case any doubts arise. Lightning Talks are not very strict talks themselves, but we want to keep them in consistent state. Here are some general rules, that we try to stick to. 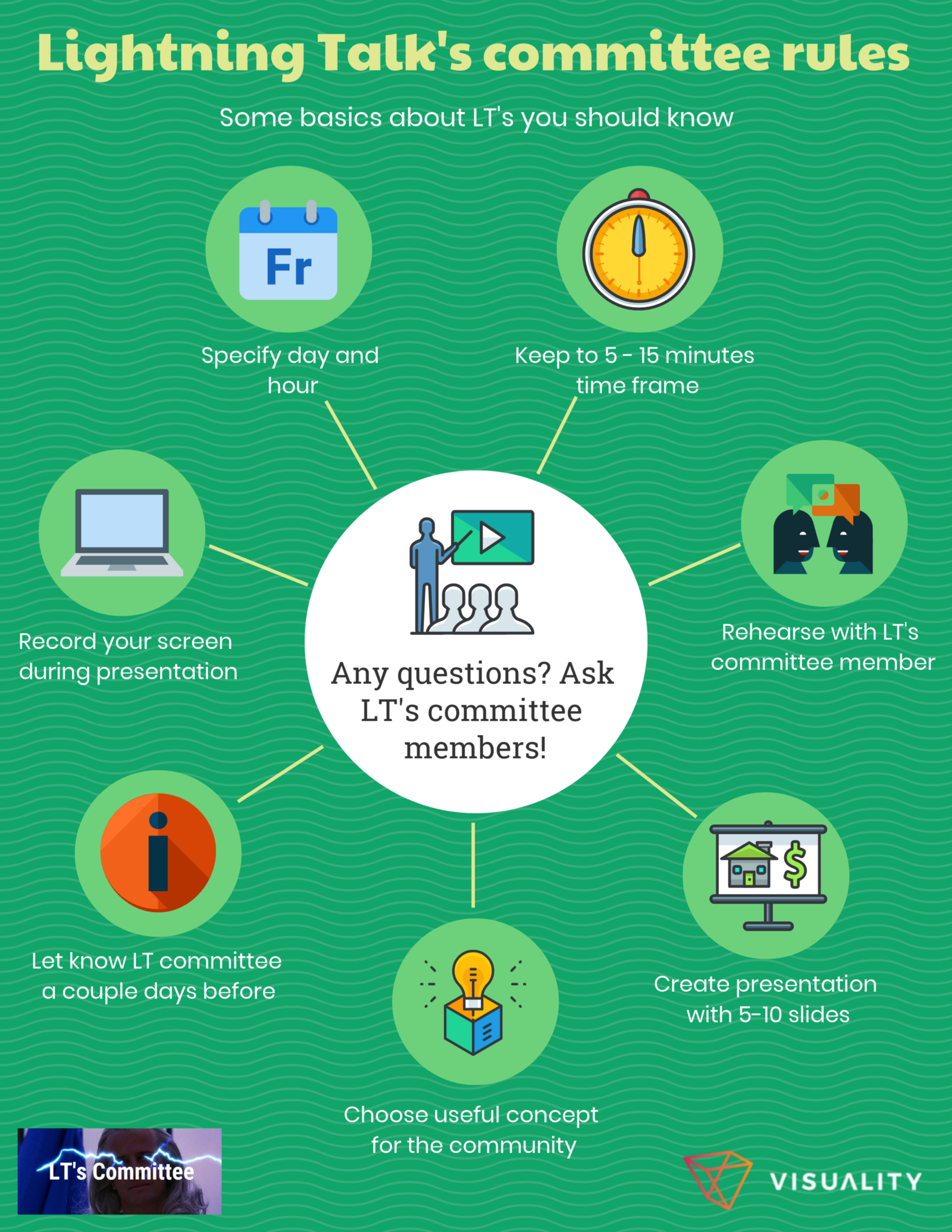 These rules are catered specifically to Visuality's lifecycle and practices, so you should tailor them according to your own.

Are you able to convince people to talk? 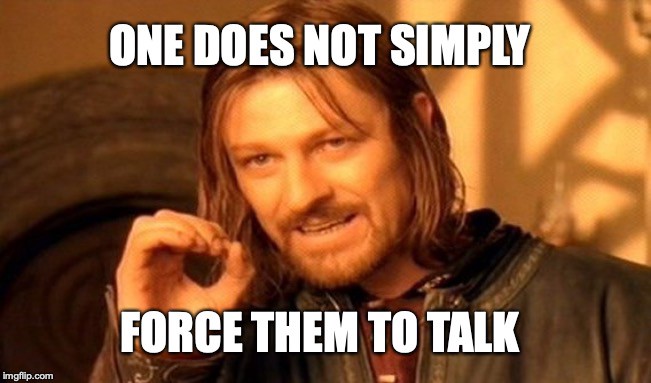 The next problem that you can encounter is to convince people to the very idea of LTs.

In general, most people are not really eager to talk publicly, not everyone is predisposed to be a good speaker. Especially, when it comes to IT community - usually they are not very extravert. The key should be to prove to them that it is worth it to train to speak because soft skills are as important as hard skills in any team. This is a possibility to both develop themselves and the rest of the community. In the beginning, probably you will need to push some people to face the challenge. Later on, it will go like a snowball.

At Visuality, LTs committee has prepared some tutorials on how to create well-designed talks. The reason was to simplify the process and at the same time, make it more precise. This was also the way to convince the community that preparing speeches and presenting is not something undoable.

The whole process was prepared with such an infographic presented above, which explains step by step how to prepare the talk.

Do you want to record it and share wider?

The last question is a more technical one - but if the answer is yes, firstly you should provide some recording tools, such as a camera, microphone and software for editing videos. Depending on how professional talks you want to record, you have to choose your level of proficiency. The next issue is the video format. Here, we record the screen of the speaker and also record themselves talking. After the talk is finished, we put them together and upload on Youtube.

As I mentioned before, such recordings have a huge commercial value, as a well-prepared talk is a fantastic way to advertise your company. Recording such presentations is heavily recommended.

At Visuality, we introduced Lightning Talks over 2 years ago. The beginnings were pretty hard, as we didn't really state any rules on how to provide well-valued talks. No time limits, no record methods, no video format, simply no management over the process. We just wanted people to talk. And obviously there were a few people who were eager to speak, but still, it wasn't enough. Most people were afraid of presenting, because of their lack of speaking skills or simply them being shy. Looking over those 2 years, as a member of LTs committee, I can say that we've learned a lot how to lead this process. Firstly, we've pushed some people to prepare talks internally and present them. We've also improved standards of our recordings and the format of created videos via new tools and software. Rehearsals and training sessions allowed us to trim or extend presentations and fix some bad habits of potential speakers. After all, the rest of our community noticed that it looks not so hard as they thought and also the idea is useful, so they started preparing talks by themselves. Recently, some of those talks were presented on Warsaw Ruby Users Group or Poznan Ruby Users Group. People are really willing to speak, so, it seems that our way of Lightning Talks has passed the exam!

Here you can see the results of our hard work over those years:

Good luck with introducing Lightning Talks in your team!

If you're interested in more blog posts like this please check out our Visuality Blog or our Medium Page.

Also if you happen to be at Websummit 2019 edition (starting in just few days) try to visit us at our stand and we can talk more!